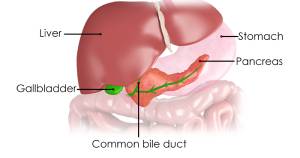 The liver is situated in the upper right side of the abdominal cavity and is the largest organ in the body, weighing 1200 -1600g. The liver has a wide variety of functions, the main functions being the removal of harmful substances from the blood and production of bile to assist in the digestion of food.

Liver surgery is most commonly indicated for resection or removal of liver cancer. It may be done laparoscopically (key hole surgery) or by conventional open surgery, depending on the site of the tumour. In Australia, the most common indication is the removal of metastases (secondaries or spread) of bowel cancer. Patients with this condition will often have other treatments such as chemotherapy or radiological procedures as part of the treatment plan.

The next most common indication is hepatocellular cancer (hepatoma, HCC), which is often associated with chronic liver disease such as hepatitis or haemochromatosis.

Occasionally, other tumours of the liver such as cholangiocarcinoma (cancer of the bile duct), gallbladder cancer and secondaries from neuroendocrine cancers and melanoma are appropriate for surgical treatment.

There are a number of benign tumours of the liver, most of which can be monitored and do not need to be removed.

Up to 70 per cent of a healthy liver can be removed as it will regenerate. In patients with chronic liver disease less can be safely removed.

Below are common topics related to the liver. Click on the topic to find out more.

This describes the path by which bile secreted in the liver is transported via the hepatic duct and common bile duct to the intestine to aid in the absorption of fats and certain vitamins. The gallbladder is connected to the bile duct by the cystic duct. Blockage of the bile duct causes jaundice. The causes of blockage of the bile duct are most commonly stones or tumour, but can include parasites and benign strictures (narrowing).

Bile duct cancer is uncommon and is mostly referred to as cholangiocarcinoma.

Surgery of the biliary tract

This is mostly done for cancer and may necessitate removal of parts of the liver or pancreas.

The gallbladder is a small hollow organ and is attached to the liver. Its function is to store and concentrate the bile that is produced by the liver and delivered to the duodenum when we eat. The bile mixes with the food and aids in the absorption of fats and certain vitamins that are dissolved in the fats.

Below are common topics related to the gallbladder. Click on the topic to find out more.

The pancreas is located in the abdomen, tucked behind the stomach. The pancreas has dual roles: it is an organ of the digestive system and of the endocrine (hormonal) system. Once food has been mulched and partially digested by the stomach, it is pushed into the duodenum (first part of the small intestine). The pancreas adds its own digestive juices and enzymes to the food, via a small duct attached to the duodenum. This process is said to belong to the ‘exocrine pancreas.’ The pancreas also produces the hormone insulin, which helps control the amount of sugar in the blood. This is the role of the ‘endocrine pancreas.’

Below are common topics related to the pancreas. Click on the topic to find out more.