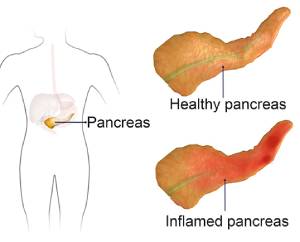 An infection is the condition of multiplication of parasitic organisms or microorganisms within the body. An inflammation is the reactions that occur in the affected blood vessels and adjacent tissues in response to an injury or abnormal stimulation caused by a physical, chemical, or biologic agent. Many people use the terms interchangeably since they have several symptoms in common and usually are treated similarly.

Normally, digestive enzymes do not become active until they reach the small intestine, where they begin digesting food. But if these enzymes become active inside the pancreas, they start digesting the pancreas itself. This process is called autodigestion and causes swelling, haemorrhage, and damage to the blood vessels. An attack may last for 2 days.

Either form can cause serious complications. In severe cases, bleeding, tissue damage, and infection may occur. Pseudocysts, accumulations of fluid and tissue debris, may also develop. And enzymes and toxins may enter the bloodstream, injuring the heart, lungs, and kidneys, or other organs.

Acute pancreatitis generally causes severe pain and the sufferer will need emergency treatment in a hospital. Pancreatitis is generally diagnosed quickly, by examination of the abdomen, and confirmed using a series of medical tests, including:

Some of the complications from pancreatitis are: low blood pressure, heart failure, kidney failure, ARDS (adult respiratory distress syndrome), diabetes, ascites (accumulation of fluid in the abdomen) and cysts or abscesses in the pancreas.

Treatment options Treatment depends on the causes and severity of the condition, but may include: