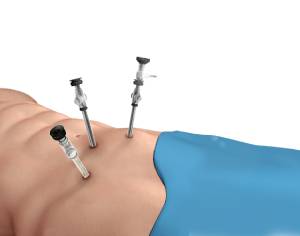 Laparoscopy is direct visualization of the abdominal cavity using an operating telescope. The laparoscope is a long thin instrument with a light source at its tip, to light up the inside of the abdomen or pelvis. Fibreoptic fibres carry images from a lens, also at the tip of the instrument, to a video monitor, which the surgeon and other theatre staff can view in real time.

Carbon dioxide (CO2) is put into the abdomen through a port that is inserted just below the navel. This gas helps to separate the organs inside the abdominal cavity, making it easier for the surgeon to see the organs during laparoscopy. The gas is removed at the end of the procedure.

Laparoscopy is a commonly performed procedure. It may be used to stage some tumours (e.g. stomach cancer). It is often a technique by which intra-abdominal surgical procedures can be done. Some examples include: