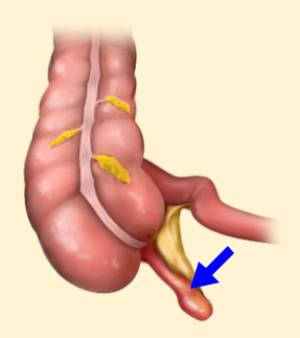 An infection is the condition of multiplication of parasitic organisms or microorganisms within the body. An inflammation is the reactions that occur in the affected blood vessels and adjacent tissues in response to an injury or abnormal stimulation caused by a physical, chemical, or biologic agent. Many people use the terms interchangeably since they have several symptoms in common and usually are treated similarly.

Appendicitis is an inflammation of the appendix, a small worm-like pouch attached to the large bowel. It can happen at any age but most cases are between 8 and 25 years of age. For young people, appendicitis is probably the most common cause of stomach pain requiring emergency surgery.

In most cases, the specific reason for the inflammation is not known but it is due to blocking of the opening connecting the large intestine and appendix. In many cases it is caused by small pieces of hardened stool (faecaliths) that get stuck in the appendix.

The first sign is usually a pain or discomfort in the centre of the abdomen. The pain usually begins near the umbilicus and moves down and to the right. This pain comes and goes in waves and increases on movement. Pain is often thought at first to be a simple stomach upset.

There is no one test that will diagnose appendicitis with certainty, usually doctors use CT scan or ultrasound to see whether the appendix looks inflamed. Surgery is performed on the basis of the doctor’s examination and results of the tests. Many diseases can cause the same symptoms as appendicitis.

The inflammation can cause infection, a blood clot, or rupture of the appendix. Because of the risk of rupture, appendicitis is considered an emergency. Anyone with symptoms needs to see a doctor immediately.

In uncomplicated cases, a two to three day hospital stay is typical. The person can go home when their temperature is normal and their bowel starts to function again. The stitches are removed 10 days after the operation. A return to ordinary daily life within four to six weeks is usual.